Join forces to create a colorful web of connections around the planet and protect your home! This two-player game was originally produced for an indie arcade cabinet, spotlighting the work of queer and trans game developers in NYC.

Meteors are headed for Earth, and our thoughts & prayers won't stop them! But you and your ally can work together to connect pairs of satellites and create protective barriers. Here's how it works:

Connect satellites = Space bar (when both players are grabbing satellites)

There are three difficulty settings, which you can choose on the title screen. (Either click the left and right arrows, or press the left and right arrow keys, when "Start" is selected.) On the easiest level, you will start with more health, and help messages will appear when you seem to be having trouble. On the harder levels, meteors will come faster and more frequently, and some will curve with gravity (instead of moving straight). Whichever level you choose, the game will get more difficult the longer you play. So good luck!

...to Ayla, for her initiative, inspiration, and help workshopping my game design

...to Death By Audio Arcade & The Dreamhouse, for the awesome opportunity to showcase this game in a physical arcade cabinet

...to Emily B, for pairing with me on adding gravity effects 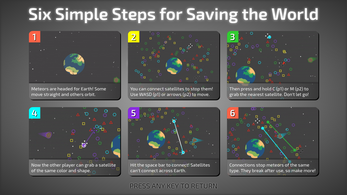